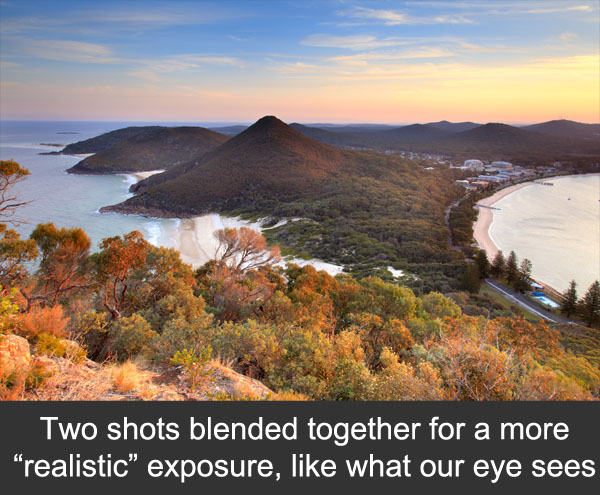 The idea that “the camera doesn’t lie” comes in many disguises and I’m betting that you’ve heard it in one form or another.

Well, I’m about to unravel this horrible idea and give you the only piece of evidence you will ever need to be able to disprove anyone who tries to peddle you this idea.

Have you ever been told that “if you have to use photoshop then it’s not a real photo”, or “real photography is all done in the camera”?

If you’ve spent any time at all in the various online photography forums or on photo sharing sites such as Flickr then I’m betting you have.

Here’s why the camera DOES lie

The first, and main point of my debunking here is a technical one. Bear with me a moment…

Digital camera sensors have a limited range of brightness that they can record, which is measured in stops. This is called the Dynamic Range and it is critical in determining how much detail will be captured in the shadows and highlights of a photo.

A Canon 5D Mark 2 has a sensor which can record 11.9 stops of dynamic range. This means that the brightest point in a photo must be no more than 11.9 stops brighter than the darkest point in the photo for it to capture all of the information in the scene. Otherwise what you will end up with is either pure white in the bright areas or pure black in the shadow areas.

It’s hard to explain in words. Here’s a picture to show what I mean.

Film cameras used to enjoy a greater dynamic range than digital and there is still a lot of discussion on this topic, but digital sensors have been rapidly catching up with film. The fact remains however that film still has a dynamic range limitation.

Now, looking at the example above, do you think that when I stood there and took those shots that I actually saw a white sky or solid black shadows?

My eyes saw a blue sky and saw deep into those shadowy areas. So what does this mean?

The camera lied to me!

So in reality, the only way to have created a photograph that actually looked as close to realistic as possible would have been to use Photoshop to blend the two images together! 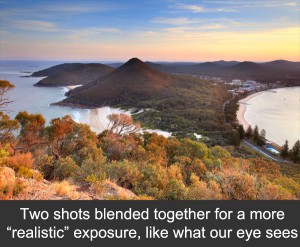 It’s not just about the dynamic range

This was the easiest example to show you in picture and the most dramatic instance of when our cameras lie to us.

However it’s not the full story.

Even if you’re photographing a scene which your camera can record the full dynamic range of, there is no camera in the world that will take a picture the same exact way that your eye sees it. And here’s how I will prove it – and how you can prove it to anyone who tries to tell you otherwise:

How you can prove to anyone that your camera lies

Here’s what I want you to do, right now.

Go grab your camera, take it to the nearest window and take a shot of what you see outside.

Then, bring that photo up on the cameras LCD screen, hold it out in front of you and compare it to what you’re looking at out the window.

Is it the same?

I’m betting not. Even ignoring the fact that your choice of lens or focal length will have likely magnified the scene by zooming in on it (that’s a lie for another day:)) take a look at the colours and the contrast in the scene and compare it to what’s on the back of your camera.

It’s going to be virtually impossible for it to actually be identical to what you’re looking at.

A word on RAW files

Your camera outputs images in either JPEG or RAW format. The RAW file is a “flat” file format that absolutely requires processing in photoshop. It contains the raw data which you either need to “develop” on your computer or you need to let your camera process it itself and turn it into a JPEG.

Whether your camera gives you the option of accessing the raw file or not (virtually all DSLR’s do allow), every digital camera shoots a raw format which it then processes to turn it into a JPEG. You know all the Scene Modes, like “Landscape”, “Portrait” etc that your camera has? They are all essentially presets or recipes for the JPEG to RAW conversion that happens inside the camera.

So if you want to maximise the realism of your photograph, what are you going to have to do? Edit it in your favourite piece of software – most likely Photoshop.

What this doesn’t mean is that you can rely on photoshop to fix a photo that was poorly taken in the first place – it’s still very important to start with a strong composition and best possible exposure – so don’t take this as an excuse to be sloppy and just “fix it in photoshop” later.

That’s not what I’m getting at.

What I am saying is that for the most realistic photograph it’s practically a REQUIREMENT to edit it in photoshop!

I like to think of it as “developing” my shot, in the same way a film photographer would develop their negatives and prints. We are just doing it all digitally these days, so next time someone spouts any of the following:

… they are probably just intimidated by the amazing ways in which modern techniques have improved the quality of images photographers are creating these days and how accessible these tools are to everyone.