How to Dodge and Burn in Photoshop (Video Tutorial) 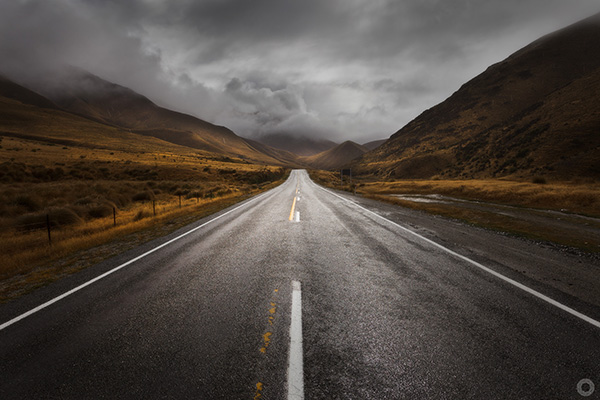 In this latest tutorial I’m going to show you the basics of how to use the dodge and burn tools in Photoshop. Then after that you’ll find out how to use those basics to start making subtle changes to your landscape photos that can help guide and direct your viewers eye to where you want them to look first in your frame.

The concept is similar to using a vignette to darken the edges of your shots, but dodging and burning is a much more controlled way to achieve this effect in a more subtle and undetectable way.

Here’s an example of one of my favourite shots which I created using mostly dodge and burn techniques.

Hi Steve here, in this tutorial will show you the basics of dodge and burn tools in Photoshop and then after that I’ll show you how to use those basics to start making some subtle changes to your landscape photos that will help you guide and direct you viewer’s eye to where you want them to look at your frame.

The concept is similar to using a vignette to darken the edge of your shots which in turn brings more attention towards the centre, but dodging and burning is a much more controlled way to achieve this effect in a more subtle and undetectable way. We will start off with the Dodge tool. The the idea in a nutshell of both of these tool – the Dodge Tool and Burn Tool, is to use them to either brighten or darken parts of your image so you can just brush around and wherever you are brushing, so its either gonna brighten or Darken that part of your image.

So it has got the same controls in terms of the brush size and shape and hardness and softness and all that stuff. So let’s just go straight on with it and see how we are gonna use it.

So you’ve got this drop down here so that’s three options and then you’ve got an exposure option here. So we’re on the Dodge Tool, so whatever we brush into is going to basically is going to be brightened. But the way that it works is, it divides it into whether we are going to Brighten the shadows or mid tones or the highlights. So let’s say for example we choose the shadows option here in this drop down and just one thing I would mention here is that these tools, the dodge and burn – they need to be done on pixel layers. So this is not a non-destructive edit and just to make sure we don’t do anything that’s not reversible will be working on a copy of our background layer.

So just as an extreme example I am gonna boost the exposure here and it’s basically, just means the strength of the brush and the effect that we’re doing. So we set the exposure on about 40% which doesn’t sound high, but for this tool is quite a high value and shadows so let me just increase the brush size here.

Now am gonna start off, am gonna brush into this part here which is actually quite a bright part of the image and you can see is not actually making very much of a difference. It is brightening it slightly, and let me just do the same up here in the sky. In fact it’s probably a better example even though i’m brushing here backward and forward, it’s not really doing very much at all and that’s because this is a bright part of the image already and we’ve got the shadows selected here.

However if I just contrast that with using the brush up in the top corner here, where it’s a lot darker to begin with, then you know we can see that is having a much bigger effect. Now let’s just contrast that with highlights. So select the highlights from the drop down there and now as I brush into the sky we should see quite a significant brightening effect happening there in the sky and just the opposite end of the scale of that now if I use this tool in the shadows here, it’s not really doing much at all. That’s because we’re brushing into the shadows but the brushes only affecting any highlights that we happened to brush over. 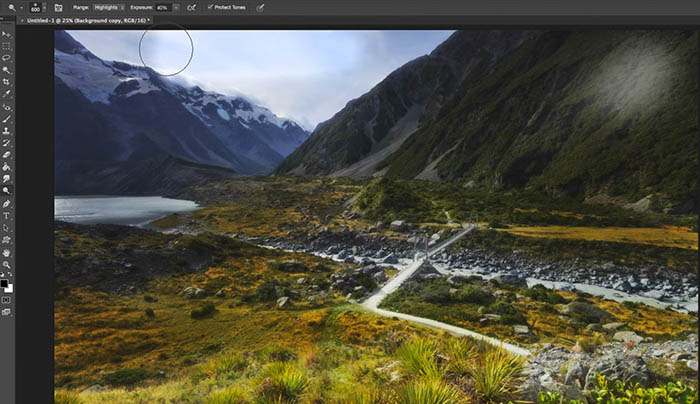 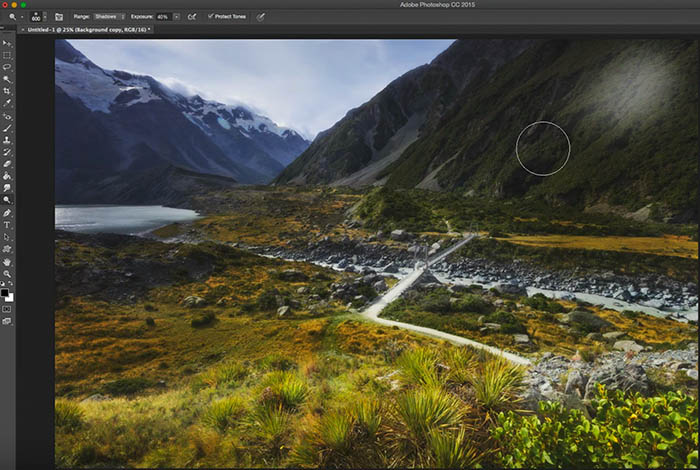 So that’s the shadows and highlights and basically the mid-tones, it’s gonna make it so, that it works on sort of middle ground. So not the extreme highlights or the extreme shadows but it’s gonna brighten everything in between. So that’s the Dodge tool. The reverse of that is the burn tool, which works in exactly the same way with these drop downs here. So the brush, if we have it affecting the shadows only, then if I brush up here its not gonna effect the sky very much at all because it’s not really a shadow but if I come over here, it’s going to turn these shadows virtually black straight away because we using such a high exposure into was already very dark of a shot. 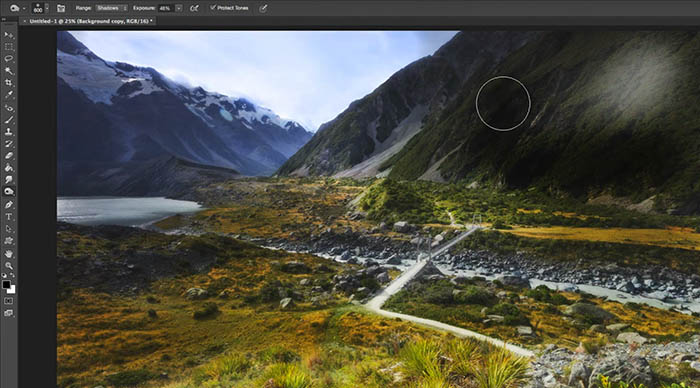 And again highlights, its gonna darken the sky quite a lot, because its highlight and that’s what we have selected there. Now this tick box here, protects tones, I usually have that selected, actually I have that selected most of the time. If we just hover over there with the mouse, it says “minimizes clipping in the shadows and highlights and keeps colors from shifting their hue”. So let me just undo this and create a new background layer, we can show difference between having this selected, does.

Actually let’s just swap over to the Dodge tool, it might be easier to to demonstrate this with dodge tool and we are going to go 100%. So am gonna just actually make a second copy so this top layer here we’re going to use to protect tones and I’m just gonna do is use one brushstroke across this patch of grass here as you can see growing up. But it’s still within the realms of looking realistic, because it’s trying to blend that brush stroke in and not blow any of those highlights and shadows.

Now let me just hide this layer and I will do the same thing without this selected on this background copy layer. So here, you can see as I do that brush stroke and then move back just like I did for the previous attempt. It’s brightening it all up, but yes just not quite doing such a good job so if I just use this top layer here, now as an example. It’s kind of washing everything out now, and when we haven’t got that protect tones selected. And for me, I just find that its more useful, if I got that selected and then really these two options here this airbrush thing here and the pressure brush option here. That’s the same, and works in the same way as previously mentioned when we talked about earlier on in the video course.

So that’s a quick explanation of how this works. Now when would you want to do this and why? Well the most common usage for dodging and burning is to really just control where the light is in your image so say for example people use the vignette which is to darken the edge of your image and so that the center of the image is more pronounced and has more of the attention drawn to it because the edges are dark.

The idea behind dodging and burning is that you can go through that same effect but, just by brushing in the darkness and the brightness where you want it. So let’s say for example I wanted to darken this foreground here. So it’s quite bright at the moment, so we need to darken that so the eye isn’t quite so drawn to it. So I will select the Burn Tool. I will probably start off with mid tones and usually if I’m using either of these tools on more than 10% exposure then it’s quite an extreme case. So I will just start off with 10% in mind too much.

The idea here is to just gradually build up and not try and do too much with one brush stroke because then it starts to look a bit obvious. So just darkening the mid tones there, maybe we’ll just go after some highlights now. Just because over here it’s quite bright, still and these leaves. It’s doing quite a subtle job it’s nice it’s not really looking like I darkened that all that much as I go along. And you know it’s not really until we hide this layer and then reactivate it again and then we see the difference it’s made. So it’s a real subtle way of blending in that darkness and lets everyone to go the other way with this grass and rocks here in the foreground. Move exposure down say 10% again and start off with the midtones this time.

Let’s see what we can do by just brightening the midtones a little bit. It’s quite nice there and may be we go through the highlights just add a bit of punch, and then we can see, we are just manipulating the light within the image, just by so brightening and darkening selectively like that.