When to Use Photoshop’s Clone Stamp vs the Healing Brush

Photoshop is a remarkably powerful piece of software, with an almost overwhelming array of tools for photo editing. This can be a blessing and a curse, since it can often be difficult to tell which tool is the best for the job.

Even once you’ve selected the appropriate tool, there are often so many different ways to use it that things can get even more confusing.

This is exactly what many people learning Photoshop for the first time run into when they are trying to decide whether to use the Clone Stamp tool or the Healing Brush tool.

Both operate in a relatively similar manner, allowing you to set a source point and then to paint pixels from that source point anywhere else in the image. The end results can be quite different, however, so we’ve decided to put together a quick guide to help you determine which tool is better suited for your project.

A simple way to remember the difference between the two is that the Clone Stamp is usually better for creating, duplicating or removing objects or elements in a scene, and the Healing Brush is better suited for adjusting the textures of objects. 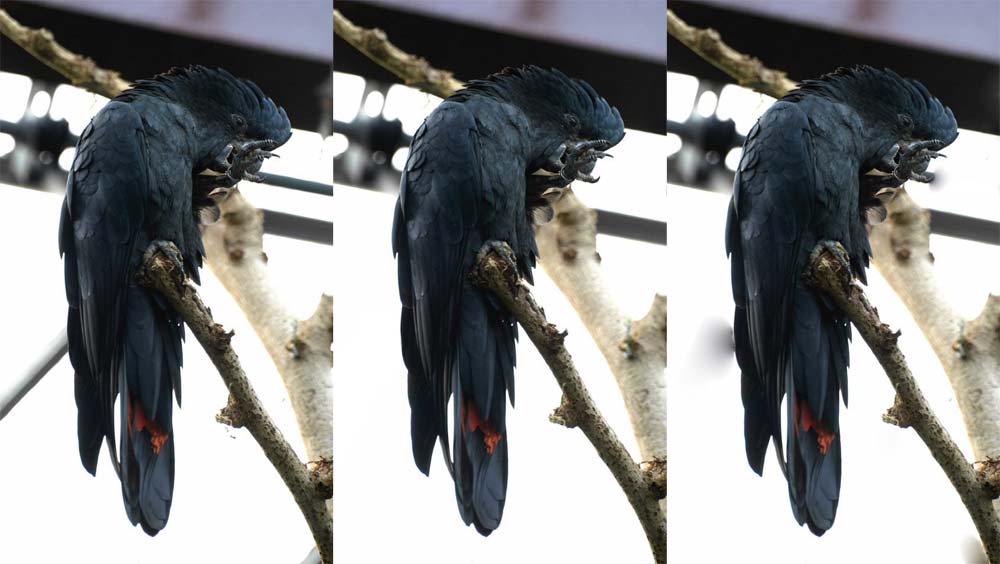 As you can see in the image above, the Clone Stamp (middle version) allows for easy removal of some of the more distracting background elements. Attempting to do the same thing with the Healing Brush (right version) creates blurred artifacts when used near the bird’s wings and claws.

It does a decent job of removing the blurred area in the upper right corner, however, much more simply than the Clone Stamp.

Note: whenever you’re working with the Clone Stamp tool or the Healing Brush tool, you should always be doing all your retouching work on a new layer so as to preserve the original image data. Set the Sample source to ‘Current and Below’ or ‘Below’ to sample all layers beneath your new layer, as you can see in the layer structure above.

The Clone Stamp tool is by far the more powerful of the two, but this can sometimes cause more problems than it solves. You don’t need to use a chainsaw to cut a slice of bread, and the Clone Stamp isn’t always the best choice for more subtle retouching work.

It excels at completely removing or replicating particular aspects of an image, and comes with a whole suite of options relating to how the cloned data appears. You can set the brush to flip the source data, to scale it, or rotate it up to 180 degrees in either direction. 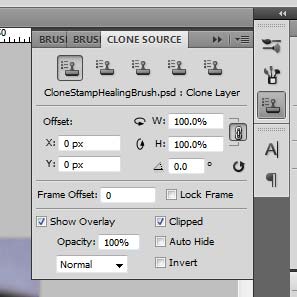 To set a source point, hold the Alt key and click on the area you want to replicate. From then on, anywhere you paint with the Clone Stamp tool will copy the pixels from your source point to the painted area. You can set multiple source points using the Clone Source palette, allowing you to rapidly switch between as many as five different source points.

So when is it best to use the Clone Stamp?

The Clone Stamp allows you to move, remove, and duplicate entire objects, which makes it perfect for removing distracting elements that might ruin an otherwise perfect composition.

If you got an amazing shot of the skyline but found that a telephone pole or power lines got in the way, it would be a relatively simple matter to remove them with the Clone Stamp tool.

A good general rule is that if the adjustment you want to make includes the edges between two or more separate objects in the scene, it’s best to use the Clone Stamp tool, as the pixels you paint can be an exact replica of the source pixels you’ve sampled.

Just be careful to notice any edges that may appear due to the shape of your brush, because nothing sticks out more from a photo than a lazy Clone Stamping job.

The Healing Brush is a powerful tool in its own right, and it can take a lot of the difficulty out of more subtle retouching work.

The Healing Brush tool won’t let you move, remove or duplicate whole sections of pixels, but rather lets you match the variations in texture and luminosity from your sampled source point. It automatically blends these elements from your source point into your painted area, taking much of the work out of retouching.

So when is it best to use the Healing Brush?

The Healing Brush tool is perfect for removing small imperfections from larger areas with variable luminosity, such as a skin blemish from a portrait model’s face or a piece of dust that has become visible on your lens. It also allows you to smooth out textures, provided that you have a decent area of regular texture to use as your source point.

In some cases, it can also be used for larger objects, as you can see in the example below. In order to remove a few of the clouds from the original (left image), we could use the Clone Stamp (middle image), but because the sky luminosity changes throughout the background, the edit becomes visible quite quickly. Meanwhile with the Healing Brush (right image), the two clouds can be removed in only a couple of clicks.

Sometimes when working with extensive image reconstructions and repairs in Photoshop, you find yourself with a wide expanse of pixels that have been heavily edited, and as a result have lost the film grain/digital noise of the source image.

This makes the edited area stick out like a sore thumb, looking as though it was simply painted on overtop of your image (which, of course, it more or less was).

This can be solved by finding a good, relatively uniform area of your original image and using the Healing Brush tool to copy the slight adjustments in luminosity and colour that make up what we see as digital noise or film grain. This reinforces the illusion that the edited areas are part of the original image, and your eye is far less likely to notice that any adjustments were made.

To sum up, the Clone Stamp is more powerful and allows more control, but the Healing Brush does more of the work for you.

In Photoshop, as in all things, make sure you choose the right tool for the job! Mastering these two tools will give you powerful abilities to completely alter your images to match your creative vision, regardless of what pesky reality has to say about it!